Denis Campbell and Haroon Siddique writing for The Guardian (14/01/2016):
Growing numbers of patients are waiting longer than they should for A&E care, urgent cancer treatment or a blue light ambulance, prompting warnings that the NHS will struggle to cope this winter.

The latest NHS performance data shows it missed a whole series of key waiting-time targets in November, forcing around 200,000 patients to endure delays.

Experts said the figures were “particularly worrying” and that hospitals missing targets is now so routine that it has “become the norm” in the NHS.

There is concern that, with performance so poor despite mild weather and little flu around so far, hospitals may struggle if a blast of really cold weather brings an influx of seriously ill patients, many of whom need to be admitted at a time when beds are already scarce.

“These new figures are particularly worrying given that they only cover November, when the weather was exceptionally mild and winter had not even begun properly,” said Nigel Edwards, chief executive of the Nuffield Trust, a leading health thinktank. “The fact that there have been such dips in performance so early in the season does not leave the health service in a good position to cope with the rest of winter.” 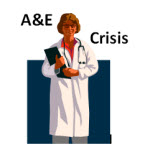 Similarly, 34,057 patients were stuck on a trolley for more than four hours in A&E in November as they waited for a hospital bed – almost five times higher than the equivalent figure back in 2010. However, only 32 waited more than 12 hours.

November also saw the largest ever number of patients occupying a hospital bed despite being fit to leave – 3,671. The NHS lost a total of 100,515 hospital bed days because of such patients – what it calls delayed transfers of care – almost double the number recorded in 2010. Of those, 26,794 were because the patient was waiting for their local council to arrange a package of care to allow them to be discharged safely.

“The issue of delayed transfers is fast becoming the biggest problem many NHS trusts are facing,” said Edwards.

In another sign of serious strain on the NHS, more than 3.5 million patients are now waiting for a planned operation in England – the highest number since 2008.

Some 7,664 people with suspected cancer did not see a consultant within two weeks of an urgent referral by their GP, as they should have, though overall the NHS met its 93% target on that measure.

Similarly, 536 patients had to wait more than the one month expected to have their first treatment for cancer. Again, though, hospitals met the target overall, treating 97.7% of patients (23,420) on time.

But the NHS failed to treat 85% of cancer patients within two months of being referred by their GP, scoring 83.5%. That meant that 1,926 people had to wait longer than they should have, although 11,643 were treated on time.

Labour said the figures proved that “the NHS has gone backwards” under the health secretary, Jeremy Hunt. Heidi Alexander, Labour’s health spokesman, said: “There is a crisis in A&E, elderly patients are stuck in hospital because of a lack of care in the community and thousands of people are waiting more than 18 weeks for operations. The reality is that this dramatic deterioration in patient care is a direct consequence of this government’s policies. They cut older people’s care in the home, meaning hospitals have become dangerously full, and cuts to nurse training places have forced hospitals to drain resources hiring expensive agency staff.”

Dr Jennifer Dixon, chief executive of the Health Foundation thinktank, said: “These latest figures from November show health services are struggling to deliver the basics, even before colder weather and any upsurge in flu.”

Richard Barker, NHS England’s interim national director of commissioning operations, stressed that frontline staff had treated record numbers of patients in November. Year-on-year demand has gone up 6.8% for diagnostic tests such as CT and MRI scans and 4.1% for consultant-led treatment while emergency admissions are also up by 1.9%, putting even greater pressure on the availability of beds.

The NHS knows it needs to do more to improve its record on cancer treatment waiting times, NHS England said.

“Bluntly – Our NHS is irreparable and Social Care is becoming so”