Public Health England has launched a nationwide ‘Be Clear on Cancer’ campaign aimed at women aged 70 and over to drive awareness of the risk of breast cancer amongst this age group and to increase their knowledge of lesser-known breast cancer symptoms. 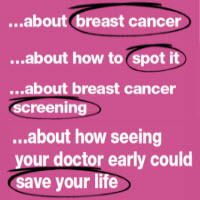 Despite older women being at an increased risk of breast cancer, they are also more likely to delay going to their GP with breast cancer symptoms. This year’s campaign activity reinforces the message ‘don’t assume you’re past it’, urging older women to visit their doctor straight away if they notice any unusual or persistent changes to their breasts such as a lump or a change to a nipple or to the skin or the shape of a breast. The campaign also encourages carers and family or friends of women over 70 to be breast aware and talk to them about the signs and symptoms of breast cancer, and if they have any signs encourage them to see their doctor.

The campaign first launched nationally in early 2014 and research shows that it successfully raised awareness that the risk of breast cancer increases with age. Promising results show a 25% increase in the number of breast cancers diagnosed in women aged 70 and over following an urgent GP referral for suspected breast cancer during the campaign period compared with the same period two years earlier.

Professor Dame Sally Davies, Chief Medical Officer, comments:
“You are never too old to get breast cancer. It is not always a lump and women should look out for any changes in the shape of the breast, a change to a nipple or to the skin.

“Spotting the signs of cancer early is very important so if women are concerned about any breast cancer symptoms they should contact their GP straight away.”

Virginia Wade, OBE,  British former professional tennis player is supporting the campaign and comments:
“I’ve just turned 70, which makes this campaign really relevant to me and women like me. The statistics speak for themselves, one in three women who get breast cancer are over 70.

Breast cancer is the most common cancer in women in England. Sadly everyone knows someone who has been touched by breast cancer, which is why I’m supporting this.

Campaign materials
The Be Clear on Cancer ‘breast cancer in women over 70’ campaign leaflets, posters and symptom cards can be ordered free of charge from the Health and Social Care Publications Orderline at www.orderline.dh.gov.uk / tel 0300 123 1002 using the following product codes.

The mainstream leaflet is being produced in alternative formats, including Braille, audio, large print, BSL and easy read. Most of these formats will be on the nhs.uk/breastcancer70 website shortly. They can also be obtained from enquiries@phe.gov.uk. For more information please contact:  barry@bdscommunications.co.uk

More information about the Be Clear on Cancer campaign

“Spread the word and save lives”