In a report launched in parliament tomorrow (Tuesday 5th July) national disability charity SeeAbility will say NHS England’s national sight testing and funding system is letting down the one million people with learning disabilities in England.

They and leading eye health organisation the Local Optical Committee Support Unit (LOCSU) are calling for an urgent overhaul of the system as there are huge levels of sight problems amongst people with learning disabilities and people are currently missing out on the eye care they need. Some are even tragically losing their sight.

“The system needs to be designed around the needs of people with learning disabilities, rather than putting barriers in their way,” says Lord Holmes of Richmond MBE, who is hosting the report launch in parliament.

“It makes much more sense for people to be supported to get low cost early eye care rather than end up losing their independence and relying on high cost care and support because their vision is impaired.”

Sight tests not only help people get the glasses they need, they can identify serious sight threatening conditions like cataracts and glaucoma. There is currently no NHS plan for eye care and little mention of the high risk of sight problems or the need for checks in new national learning disability strategies.

The current NHS contract for sight tests fails to recognise that people are likely to need additional time or appointments to complete a sight test, as well as better support with glasses. Those of working age may not be eligible for NHS funded sight tests, unlike other high risk groups which are, such as those with a family history of glaucoma.

Supporting the call for national approach, Katrina Venerus, speaking on behalf of the Optical Confederation, said: “Despite pockets of good practice where the LOCSU learning disabilities eye care pathway has been introduced, it’s clear that local commissioning is not working and people with learning disabilities are missing out on potentially life-changing sight tests. A national approach is what required.” 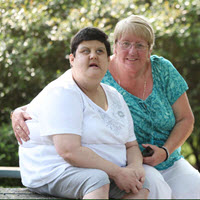 SeeAbility also says there needs to be awareness training in health and social care on the risks and signs of a sight problem in people with learning disabilities. Eye care services need to provide accessible information and reasonable adjustments, and the report features projects across the country supporting people with learning disabilities that others can learn from, including SeeAbility’s work to deliver sight tests and glasses to children in special schools.

Another example is a recent pathway of eye care for adults with learning disabilities in Barking and Dagenham. Maureen Rose campaigned for better awareness and
eye care after her daughter, Sally, who has the rare genetic condition 18P Syndrome, lost most of her vision due to glaucoma. In her words, “nobody had told us Sally’s learning disability came with an increase risk of sight problems”, but the pathway is now preventing this from happening to others in the borough.*

Scott Watkin, SeeAbility’s Eye Care and Vision Development Officer, will be sharing his personal experience of eye care in parliament. Scott has a learning disability and a serious eye condition, keratoconus, that has been treated but still needs monitoring. It was first spotted in his special school and Scott says:
“Just because I have a learning disability it doesn’t mean my sight isn’t as important as anyone else’s. I have a job and a young family, and things would be much more difficult for me if my sight hadn’t been saved – but I was lucky.”

Notes to Editors
SeeAbility is a UK charity supporting people with sight loss and multiple disabilities. As well as providing specialist support (housing and care), we have a wealth of information including easy read factsheets about eye care and eye health; details of optometrists who can support people with learning disabilities to have an eye test and access good eye care. We also offer training in eye care and vision and we run a project delivering sight tests and eye care in special schools.