Figures for cancer in France

The average age of diagnosis is 68 in men and 67 in women.

Cancer mortality has decreased over the last twenty years. However cancer is the leading cause of death in France.

Most common cancers in men :

Most common cancers in women :

Cancer research France is collaborative by definition. Researchers at the Institut Curie often join forces with colleagues at French institutions and, more broadly, on an international scale. This open-minded approach is very much the norm at Institut Curie. 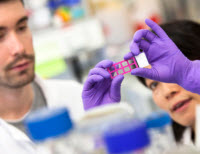 The Research Center at Institut Curie is part of a rich environment in which it has developed numerous ties with universities and institutions to increase its sphere of influence, pool its resources and expertise, and strengthen its strategic position. It is supported by its institutional and university authorities and by industry.

The Centre de Protonthérapie at Institut Curie offers an ultra-precise form of radiotherapy used to treat certain adult and childhood cancers. This level of precision requires cutting-edge equipment along with an expert team.

Proton therapy is an ultra-precise form of radiotherapy, radiating tumors with high precision while protecting the healthy organs close to the tumor. This ultra-precise technology is indicated for treating children in particular, since it comes with a lower risk of side-effects, as well as for certain adult cancers such as eye tumors.