Since sustainability and transformation partnerships (STPs) published their plans late last year, the issue of the number of NHS hospital beds has been rising up the health care agenda. Alongside integrating health and social care and boosting primary and community services, some STPs – for example Dorset, Derbyshire and some STPs in London – have included proposals to reduce the number of hospital beds in their plans.

Subsequently, some stakeholder groups have voiced concern: for example, the Royal College of Emergency Medicine thinks that the NHS needs more beds, not fewer, if it is to meet performance targets. So we decided to look into the number of hospital beds, explore trends and ask if it’s realistic to reduce numbers further in the coming years. 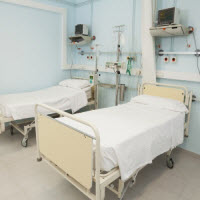 The NHS has been reducing the number of beds for decades: since 1987/8, the total number has more than halved from around 299,000 to 142,000. Within that, the numbers of beds for people with learning disabilities and mental health problems have fallen more substantially – by 96 and 72 per cent respectively. Several changes in the way that care is provided have made these reductions possible. For example, care for people with mental health problems and learning disabilities has gradually shifted from institutional settings into the community; technical improvements in surgery have meant more patients undergo day surgery – in cataract surgery almost all operations are now day cases; and average length of stay for hospital patients has fallen from eight to five days over the past 15 years thanks to developments in clinical practice and how patients are managed.

But can this downward trend in number of beds continue?

On the one hand, there are clearly opportunities to use hospital beds more productively. As the Getting It Right First Time initiative has highlighted, there are substantial variations in average length of stay for some procedures across different hospitals. Variations in how complex older patients are managed means these patients spend more days in hospital in some areas of the country than in others. And many patients experience delays in the discharge process meaning they spend time in hospital when they are no longer benefiting from being there. In July this year, more than 5,860 beds were occupied by patients whose discharge was delayed. Progress in these areas would help to make more productive use of existing hospital beds. While national NHS leaders are keen to make such progress, it is unlikely to be straightforward, as recent tensions between NHS England and local government over efforts to cut delayed transfers of care exemplify.

On the other hand, however, today there are a number of factors that make the wisdom of reducing the number of hospital beds far more uncertain than it may have been in the past. England’s population is growing and ageing: by 2030 one in five people in England will be aged over 65, and therefore more likely to need health care. Demand for hospital care is rising with increases in A&E attendances, emergency admissions, and elective admissions. In turn, bed-occupancy levels in hospitals have risen to new highs in the past few years; in 2016/17 overnight general and acute bed occupancy averaged 90.3 per cent. Reductions in average length of stay have slowed in recent years, and may well slow further in the years ahead. Out-of-hospital services – particularly intermediate care and social care – which play a key role in supporting people as they leave hospital are under real strain with access to publicly funded social care becoming more difficult. Finally, the simple fact that the vast majority of beds for those with mental health problems or learning disabilities and beds for the long-term care of older people have already been closed means there is very little scope to reduce numbers further. Instead, future reductions in the number of hospital beds would mean reducing the number of acute beds, which historically has been more difficult. These factors help to explain why the pace of reduction in the total number of hospital beds has slowed in recent years – falling only around 4 per cent between 2012/13 and 2016/17 – and why bed-occupancy levels have risen.

The NHS’s record over the past 30 years is one of success. Adopting new ways of providing care has allowed the service to provide higher-quality care to increasing numbers of patients while reducing the number of hospital beds. But it doesn’t follow that the number of beds can be reduced indefinitely. Today circumstances make it less clear how patient needs are going to be met effectively if more beds are closed – particularly in light of the lack of money to develop alternative out-of-hospital services. So, while some areas may be able to safely reduce the number of beds, substantial reductions in the total number of NHS hospital beds in the next few years seem neither achievable or desirable.

Source: Leo-Ewbank at the King’s Fund