Steve Connor writes in The Independent – The Roman philosopher Seneca the Younger said “there is no great  genius without some touch of madness”. Now scientists have shown that he may have ben right.

A study of 150,000 individuals has found that their relatives of patients diagnosed with schizophrenia or bipolar disorder are more likely than the general public to be creative professionals such as actors, dancers, musicians, visual artists or writers.

The researchers cannot be sure whether the link is due to the shared genes or a shared upbringing and environment. But they suggested that it could be explained by similarities in the way the brain works in creative people and in patients with schizophrenia and bipolar disorder. 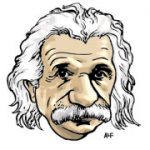 The research published in the journal Nature Neuroscience, looked for the same DNA variations in the genomes of 1,000 members of Icelandic national societies representing visual artists, actors, dancers, musicians and writers.

It found that these creative professionals were 17 per cent more likely than non-members to carry the same genetic variants.

“Probably, most people with schizophrenia or bipolar disorder would give up some of their creativity to be rid of these awful afflictions”