Focus on Disability - For Disabled People, the Elderly and their Carers in the UK

Hundreds of disabled tourists have spoken out after having trips to British tourist spots ruined by a ‘disgusting’ and ‘degrading’ lack of usable toilets.

“It leaves you feeling like they don’t want me there, and it makes me feel very off and guarded for the rest of the day.”
Disabled tourist

One person, who wishes to remain anonymous, said: ‘Using the toilet meant lying on a dirty floor,’ while others were forced to urinate in bottles by a lack of disability-friendly facilities, or even to forgo drinking water to avoid going to the loo. 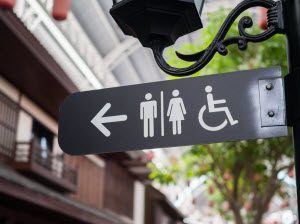 Leonard Cheshire and online community Disability Horizons received 280 responses from disabled people on the availability of accessible toilets at UK attractions in 2019.

More than seven in ten of the respondents, 73%, said that they had arrived at a tourist attraction in the UK to find a complete lack of toilets that they could use. Of these, almost the same proportion again (71%) said they had been promised an accessible toilet before visiting.

Even when so-called accessible toilets were available, this was no guarantee of an easy visit. Toilets meant to be reserved for disabled people with special ‘RADAR’ keys, for example, were open to exploitation, with one visitor telling Leonard Cheshire that:

‘people [can] just buy RADAR keys off Amazon and eBay rather than being assessed for them, meaning accessible loos are taken up by people who don’t need them.’

‘The people that built these places are irresponsible. They didn’t think of people in wheelchairs.’

Understandably, many were put off making trips to tourist attractions, with nearly 7 in 10 (68%) saying the lack of accessible toilets deterred them.

‘You feel out of sorts, like a rug has been pulled out from under you. It also leaves you feeling like they don’t want me there, and it makes me feel very off and guarded for the rest of the day.’

‘We’ve seen a snapshot of the situation facing disabled travellers, and the picture is grim. Clearly, far too many people are facing unacceptable conditions at tourist attractions around the UK.

‘Even aside from the impact this has on disabled people being able to live independent lives, there are major implications for the tourism industry, which could inadvertently be turning away huge numbers of potential customers.’

Leonard Cheshire and Disability Horizons surveyed 280 UK residents online during June and July 2019. All respondents consider themselves to be disabled or to require accessible toilets. This data is not representative of the wider population, nor is it weighted.